It’s the latest in a long line of NHS controversies to hit the headlines – the taxpayer-funded organisation will be providing new mums with vouchers, in return for proof that they’ve breastfed their babies.

It’s a pilot scheme funded by the government alongside the medical research sector. Mums in deprived areas of Sheffield and Chesterfield will be offered up to £200 of shopping vouchers (£120 for six weeks, and a further £80 if they reach six months).

Dr Clare Relton leads the Sheffield University team behind the project, who have pointed out the health and educational benefits of breastfeeding.

According to critics, however, they’ve woefully missed the point. In her Independent column, Grace Dent emphasised that many women don't breastfeed because they can’t afford to effectively give up their jobs for six months. She continued by criticising the pressure put on mums to breastfeed, which ‘seems like the tedious one-note hobbyhorse of a small vocal group of women who gave up jobs to be mummies and are now sat at home with laptops disseminating guilt and shame’.

In the Telegraph, Laura Perrins wrote in favour of the scheme – pointing out that financial rewards level the playing field of breast milk versus formula, by making up for the time women may have to take off work. She cites UNICEF, who said that 'even a moderate increase in breastfeeding rates would save the NHS £40 million and therefore save the tax-payer money in the long run.' 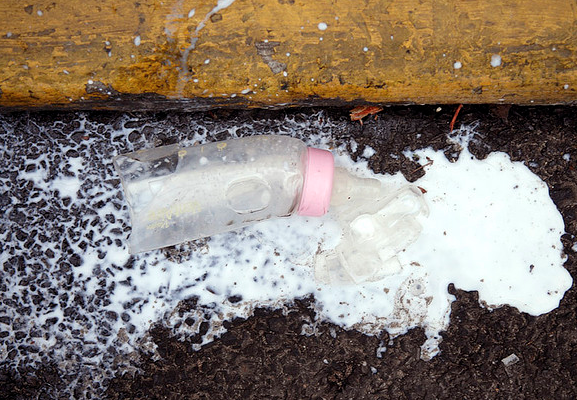 The financial argument isn't pacifying opponents. Louisa Smythington-Mills advocated more support for midwives as a more effective solution to low breastfeeding rates. Meanwhile, in the Guardian, Joanna Moorhead – a self-proclaimed enthusiastic advocate of breastfeeding – lambasted the initiative as ‘a patronising, naive, ill-thought-out gesture.’ She describes the complicated, personal nature of breastfeeding one’s child – something she believes that this scheme totally disregards.

Let's hop over to the New Statesman, where Glosswitch echoes the anger at the perceived assumption that women don’t feed their children because they’re ‘not bothered’, when the real reasons are far more complex. And she asks if it’s a fundamental abuse of a woman’s right to her own body: ‘I wonder what this says about our attitude towards women and their bodies that we will bribe them to perform biological functions that they should be free to opt out of.’ The subject of class sneaks back in here as she describes the ‘lactating Primrose Hill Polly Fillers played off against ignorant formula fiends who need bribes in order to make them do the right thing.‘

It’s certainly a personal debate. As a woman, what do you think? Is it right to try and readdress the financial imbalance of breast and formula? Or is it a patronising assumption that disregards the individuality of mother and child? Is it even any of the government’s business whether and how long mothers choose to breastfeed their children?

You guessed it – we’re WISPchatting this tomorrow from 2pm. Join in using the #WISPchat hashtag, and share your views.

I haver chosen to breast feed my baby because of the health benefits that it brings. I do think it is a personal choice though and the money could perhaps be spent on supporting mothers to breast feed instead of the quick in and out hospital treatment myself and others receive.

I was 18 when I had my son, and chose to breast feed purely due to health benefits and convenience. I find it alarming that people who otherwise would not have done it will do for the sake of a new bag or some new shoes rather than for all the natural benefits. Having said that, I am aware that my generation are very reluctant to breastfeed due to hegemonic views that breasts are purely for sex, so perhaps this will encourage more young mothers to breastfeed their children.